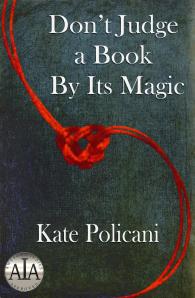 Don’t Judge a Book By Its Magic

Colleen is a normal girl. She loves shoes, chick flicks, and cute clothes. The only thing abnormal about her is that she’s just become a magician; not the disappearing bunny kind, but the power-shooting-out-of-your-hands kind of magician.

Her problem now is that she doesn’t believe in magic. Well, she believes in it. She’s seen it shoot out of her own hands, but she opposes it in a moral sense; no hexes, no spells, no incantations, no potions, no amulets, no tomes, no casting circles, no eye of newt, none of that. She has to be very clear because people pressure her about it. Whatever they say about “how it’s done,” this is a morality issue for her and she will not cave in to their pressure.

Join Colleen at Seattle Pacific Regional University, where she becomes a part of The Convergence. She’ll learn the freaky side of Work Study, Financial Aid, and Vyxhepiocht. Seriously, she’s never seen so many hot guys. It’s going to be wild!